The Killian Homeplace in Lanesborough, County Longford, in the heart of Ireland – shared with permission from Joan Gallagher, of whom we share Great, Great Grandparents Luke and Anne Furey Killian. My Great Grandfather, Thomas Killian was born in this house..

It’s a special day to celebrate my Irish roots, my heritage, my ancestors and where I come from. . . my maiden name of Killian.

I am from the land of green hills, sharp rocks and waters crashing amongst the coasts, damp breezes and mist that bring about the wild cherry.

I am from houses made of stone, laid by hand, brick by brick, stone by stone. This shelter, a home where families are born, raised and let go, but always welcomed upon return.

I am from music. Guitars, pianos, accordions and harmonicas. And voices that harmonize and know each others’ tunes. Melodies sung in joy and celebration as well as in sorrow that takes us to the heavens. Wherever the Irish are – music you will hear.

I am from storytelling. Through voice or the pen, called to preserve and share stories of the day and yesteryear. Tales of wisdom and ancient lore, keepers of the flame.

I am from the lure of the drink. Guinness and rum, whisky and Bailey’s.  Precursor for embellishments of the Irish lore, or a salve for the pain. Best friend or worst enemy. I’ll leave the liquid stars alone.

I am from Hail Marys and Our Fathers, commandments and confessions, Ash Wednesday and fish on Fridays, prayers that kept the children from perishing and mothers from distressing.

I am from big hearts filled with love, embracing and laughing and gathering and families and aunts and uncles and cousins.

I am from a blessing of what we know as Irish.

I am participating in the 14th Annual SOL 2021 March challenge. For 31 days, I will attempt to write and share a small slice of life from my days. If you’d like to read more of today’s slices from other teacher-writers, please head over to twowritingteachers, who have also committed to this challenge.

Sometimes, I can capture a moment with more specificity by drawing doodles than in writing a descriptive micro-memoir. Speech and thought bubbles lend to inferences that can portray my characters more than I could in describing them in words. And, it’s quicker.

It can become a curse, however, as you start to see everything as a graphic novel, visualizing a scene or overheard dialogue as cartoon snippets. You can’t get down things fast enough as once you start, you’ve activated the launching sequence. Then, you begin asking yourself what becomes “story-catching worthy”. I’ve come to believe that everything is “story-catching worthy”, and if we don’t capture it, it’s gone forever, and sometimes we don’t know a story’s worth until years later.

Being an introvert, I can quietly observe my extrovert family members and their witty conversations. They don’t realize I’m taking it all in. Actually, my husband does. He sometimes says, “Did you get that, hon? Can you put that in your notebook?”

His life is much more “story-catching worthy” than mine.

But, perhaps that’s why we were partnered. 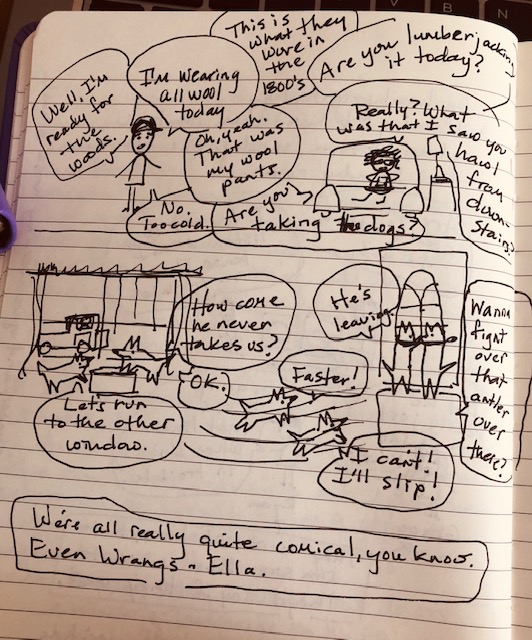 I don’t like to admit it, but we are pie snobs at my house.  It’s not our fault.  I blame my mother-in-law (or should I say credit?).

Before I even married my husband, I knew that making pie from scratch was going to be an art that I wanted to master.  His mother, you see, had the gift of creating these masterpieces and at the end of many Sunday meals, they would be presented, savored, and devoured.

I was there.  A mere 16-year-old girlfriend.

I saw the look on my husband’s eyes when the pie came out.

I saw the look on my father-in-law’s eyes when the pie came out.

I also saw the family in my husband’s house melt into a blissful state upon tasting that first bite.

And, I saw the love that radiated around the table.

I learned then and there that I would need to figure this pie thing out.  As a new bride, my pies were a sad disappointment. Crust making was torture.  My husband persevered, never criticizing my attempts.  Perhaps he knew he still had his mother’s pies as a default.  Or, maybe he was praying that eventually I would get there.  Really, I think he was just grateful that I was trying.

It’s taken years, and my pie making art is one of the few things I will openly say that I’m pretty good at.  There are days that no matter what, a crust won’t take shape and I’ll throw it in the garbage and start over (or decide to make a box cake instead).  There are days when I can’t find my rolling-pin cover and I have to cut off the toes of a sock to stretch over the pin.  And, there are days when I overcook the apples turning them to applesauce. 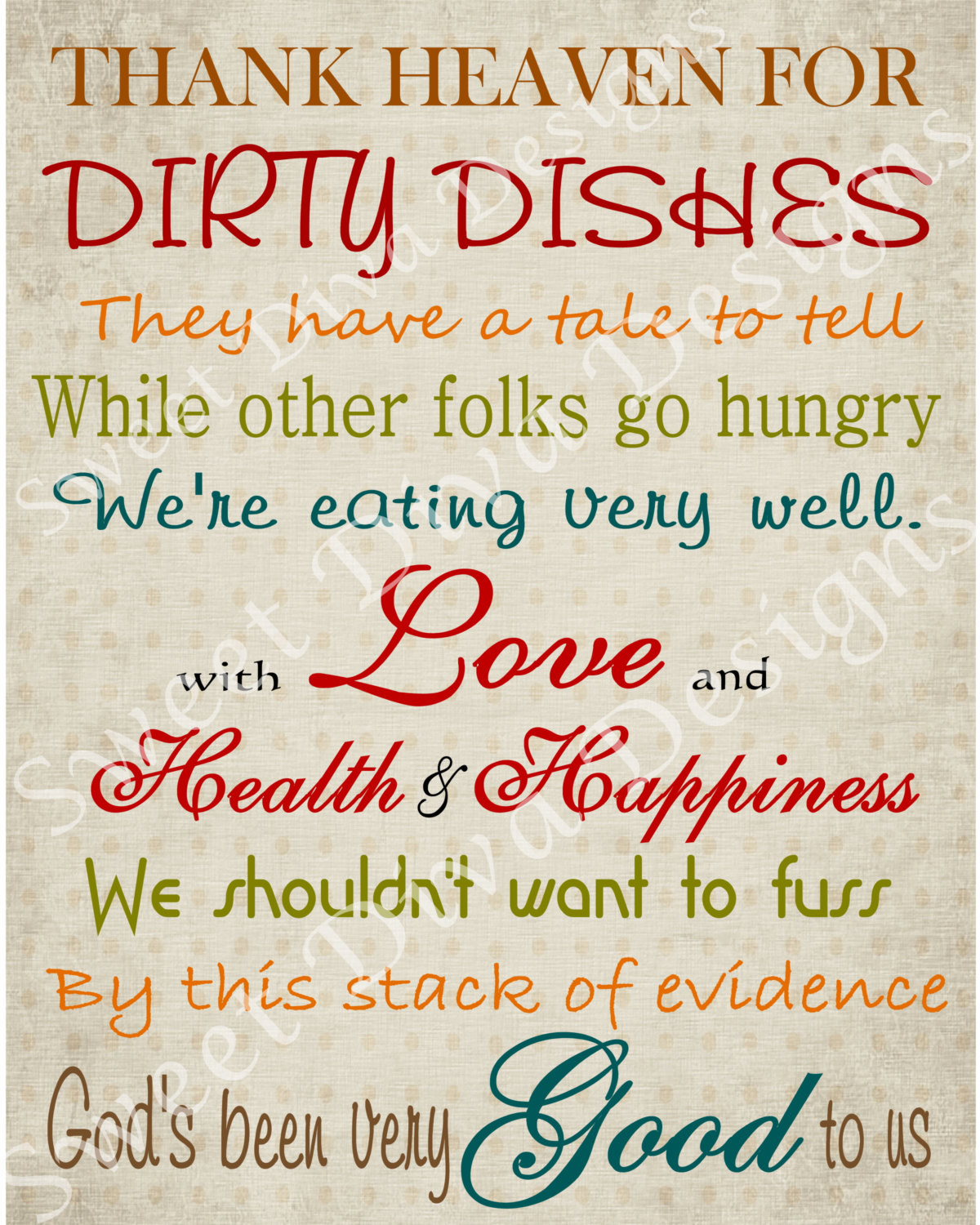 Knowing that your kitchen sink is adorned with the overflowing of dirty dishes causes one to linger in bed a little longer on a Saturday morning.  Even to get to the coffee maker means some dishes need to be washed. 😦  My husband snuck out of bed early to head up to work for a bit.  On any other Saturday morning, he would be helping, but today, it’s up to me.

I’ve never been one to fret about going to bed with dirty dishes in the sink.  I know I should as it’s certainly not a pleasant way to start the day by peering into the sink wondering where the wash cloth is.  My mother would be horrified, although, I’ve also heard her say that she often wishes she could ignore the sink dishes and go straight to bed.  She has a lot of German in her, so I understand.

It doesn’t bother anyone else in the household enough to do them before bed, so why should I be concerned?  I ask for help, sometimes, and I get ridiculous excuses:

“Actually, I was just going to watch this hunting show. How about after?” (husband)

“Are there any scraps on those plates?” (dog – Sandy)

I will hear my Grandma Killian’s voice, “Oh, the hell with it,” and I just leave them.

I guess I have more Irish in me than German.

I have not decided if it’s a good trait or not.

Image above is from https://www.etsy.com/market/dirty_dishes.  I think I need to buy it as a reminder.

I’m participating in twowritingteachers March Challenge of posting a blog post every day for the month of March.  While I’ve missed a few days, I’m still in it for the long haul!  To check out other writers, visit here.